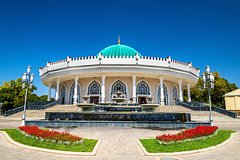 Handly picked tour that fits for everyone with reasonable price where everyone can afford. And we assure you will get the best travel experience!

Independence Square is a central square of Tashkent, Uzbekistan

Stop At: Memorial to the Victims of Repression in Tashkent, Tashkent, Uzbekistan

The traditional and old bazaar

A cultic architectural complex and the religious heart of Tashkent

The architect Yeregeny Rozanov decorated the massive structure if the Peoples' Friendship Palace in Tashkent with traditional local motifs.