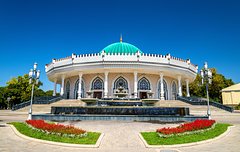 Handly picked tour that fits for everyone with reasonable price where everyone can afford. And we assure you will get the best travel experience!

Independence Square is a central square of Tashkent, Uzbekistan

A historical landmark in Tashkent

Stop At: Memorial to the Victims of Repression in Tashkent, Tashkent, Uzbekistan

The traditional and old bazaar

A cultic architectural complex and the religious heart of Tashkent

The architect Yeregeny Rozanov decorated the massive structure if the Peoples' Friendship Palace in Tashkent with traditional local motifs.

Its extraordinary exhibitions and collection of modern and contemporary art