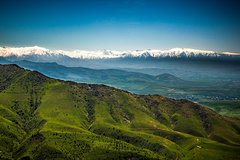 One of the main reasons to visit the Shahrisabz is to see the mountain pass and the rural area of Uzbekistan. The road starts with the vineyards, fruit trees, vegetables and son. Slowly the elevation will change and the fields will be replaced by hills and eventually by Rocky Mountains. The Teshik Tosh or Rock with the Hole is the first stop to explore the incredible work made by mother nature. The legendary movie Apachen starring the famous Gojko Mitic was shot at the same location because of the resemblance with the American Southwest prairie.

Stop At: The Palace Complex of Ak-Saray, Shahrisabz Uzbekistan

Ak Saray Palace (White Palace). The dimensions of the building can be perceived when looking at the gate towers: the two towers were 50 m high and had an arch with a span of 22 m. The buildings were destroyed in the 16th cent. by order of the ruler of Bukhara, Abdullah Khan.

In 1435, the Kok-Gumbaz mosque (the Blue Dome) was built opposite the Kulyal's mausoleum and on the same axis. The inscription on the portal says about its construction by Ulugbek on behalf of his father Shah Rukh. It played the role of the Juma Mosque, that is, the Friday Cathedral Mosque of Shahrisabz.

The creation of an architectural ensemble the Dorut-Tilavat madrasah mainly dates back to the reign of Ulugbek. First of all, a domed mausoleum was erected over the tomb of Sheikh Kul, on the remains of some earlier buildings. Walk around take great pictures with the gigantic blue dome over the Friday mosque and the intricate arches.

You will meet lots of local folks here, and particularly wedding parties.It is located in the center of newly bult park with the greenery and flowers and you can have an amazing ice cream in one of the "chayhanas" (traditional tea house) there with carved wooden columns.