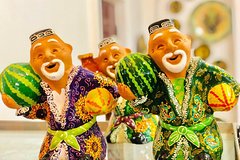 Charming Uzbekistan Tour. This tour will help you to explore local culture and traditions and enjoy the charm of Uzbekistan!

Stop At: Tashkent, Tashkent, Tashkent Province
Arrive in Tashkent. GLOBAL CONNECT driver will meet you at the Tashkent International Airport and transfer you to the hotel (Check in from 14:00). Start sightseeing from the Old City part of Tashkent. Visit Khast Imam - a cultic architectural complex and the religious center of Tashkent where the world famous Uthman Quran has been preserved. Khast Imam complex consists of Barak-Khan Madrasah, Tillya Sheikh Mosque, Muyi Muborak Madrasah, Kaffal Shashi Mausoleum, New Khazrati Imam Mosque and the Muftiate building. Drive to Chorsu Bazaar. After exploring the bazaar visit the State Museum of Applied Art to see priceless samples of applied art created by golden hands of masters from the first half of XIX century up to the present time. Have a short Tashkent metro ride from "Kosmonavtlar" station to "Mustakallik Maydoni" station. Visit Independence Square, Alisher Navoi State Academic Bolshoi Theatre, Amir Temur Square and Museum, "Broadway" street where some street artists and painters display their original artworks (there are many shopping centers, fashion shops, boutiques, restaurants, and cafes are located on and around the Broadway) and Monument of Courage. Drop off at the hotel. Free time. Overnight at the hotel.
Duration: 7 hours

Stop At: Uzbekistan State Museum of Applied Art, Rakatboshi st. 15, Tashkent 100031 Uzbekistan
In 1927, the first exhibition of best works of Uzbek masters was conducted. Subsequently it has grown to a permanent one and became known as "National Exhibition of Uzbekistan".

In the following years, the exhibition was enriched with different works of art. Along with it, other samples like hand-made embroidery, jewellery, carpets and other works of applied art that were made in past centuries were bought and demonstrated at the exhibition. Namely these collected samples of applied art were demonstrated in the Museum of Handicraft Art which was opened on 7 of July 1937 in Tashkent.
Duration: 1 hour

Stop At: Metro Taschkent, Little Ring Rd, Tashkent 100097 Uzbekistan
The Tashkent Metro is the rapid transit system serving the city of Tashkent, the capital ofUzbekistan. It is one of only two subway systems currently operating in Central Asia (the other one being the Almaty Metro). It was the seventh metro to be built in the former USSR, opening in 1977. Its stations are among the most ornate in the world. Unlike most of the ex-Soviet metros, the system is shallow (similar to the Minsk Metro).
Duration: 30 minutes

In 1929, amateurs of concert-ethnographic group led by M. Kari-Yakubov was established and later founded the professional theatre. In 1939 it was renamed to the Uzbek State Opera and Ballet Theatre, and in March 1948 it was united with Russian theatre and called as the State Opera and Ballet Theatre named after Alisher Navoi. Later, in 1959 the theatre obtained the status of Academic theatre and in 1966  the status of Bolshoi Theatre.
Duration: 15 minutes

Stop At: Amir Temur Square, Mirabad District, Tashkent Uzbekistan
Tashkent Amir Temur Square - is located in the Heart of the Tashkent city. In the Centre of the Square is the majestic Statute of Amir Temur on the horse, square is covered with green trees, pavements are decortaed with flowers, The Statute faces the Independence Square and between the two squares is located Broadway.
Duration: 1 hour

The 1966 Tashkent earthquake occurred on 26 April. It had a magnitude of 5.1 with an epicenter in central Tashkent at a depth of 38 kilometers (1.95.0 mi). The earthquake caused massive destruction to Tashkent, destroying most of the buildings in the city, killing between 15 and 200 people and leaving 300,000 homeless. Following the disaster, most of the historic parts of Tashkent had been destroyed and the city was rebuilt.
Duration: 20 minutes

Pass By: Lyab-i-Hauz, B. Nakshabandi, Bukhara Uzbekistan
06:30 Transfer to the train station.

17:25 Arrive in Samarkand. Transfer to the hotel. Check in. Free time. (Recommended to visit Gur-Emir and Registan to see a night view). Overnight at the hotel.
Duration: 5 hours

20:10 Arrive in Tashkent. Transfer to the hotel. Free time. Overnight at the hotel.
Duration: 8 hours

Transfer to the Tashkent International Airport according to the flight time.

Special Offer - Book by January 26 to save 8% off our previously offered price! - Book Now!