1-Day Tour of Samarkand from Tashkent 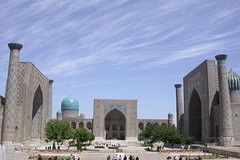 1-Day Tour of Samarkand from Tashkent

Explore Samarkand, the famous capital of the 14th-century Timurid Empire, on this guided, 1-day sightseeing tour from Tashkent. Samarkand is one of the oldest inhabited cities in Central Asia, prospering from its location on the Silk Road between China and the Mediterranean. Roam Samarkand's streets in search of its famous mosques and mausoleums. Also, visit Registan Square in the heart of Samarkand, plus the Ulugbek Observatory, the Gur-Emir Mausoleum, and much more. Hotel pickup and drop-off in Tashkent, plus all entry fees are included on this small-group tour.

This full day of sightseeing begins with a 7:15am pickup from any hotel in Tashkent. Travel to the railway station to catch an 8am, high-speed train departing for Samarkand. After arriving in Samarkand at 10:30am, the local tour guide and driver will be waiting upon arrival to introduce some of the most popular attractions in Samarkand.

Some of the attractions and points of interest to see include:
• Bibi Khanum Mosque - Named in honor of the eldest wife of Great Timur (14th century)

• Ulugbek Observatory - The biggest observatory, built by Ulugbek (15th century)The return to the railway station is at 4:30pm to catch a high-speed train departing for Tashkent at 5pm and and arriving in Tashkent at 7:40pm. The day concludes with a drop-off at any Tashkent hotel.