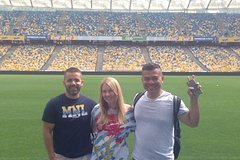 You have a great chance to visit NSC Olimpiyskiy and feel a breathtaking atmosphere of the largest Ukrainian football stadium. All football fans are welcome to explore an incredible arena that hosted a final match of UEFA Euro 2012 and Champions League 2018 Final!

After meeting your driver at the reception of your hotel, you will drive to the Olympic Stadium where the tour starts.

Olympic Stadium in Kiev is one of the top attractions of the city. It does not matter whether you are a football fan or not, this place will impress you with its attractiveness and scale. This gorgeous and world-famous sport arena hosted numerous significant games of the Ukraine national football team and the games of the UEFA Champions League.

The stadium was officially opened in 1923 and then was reconstructed several times, including the reconstruction in 2011, before the UEFA Euro 2012. Currently, the main sport arena of Ukraine can accommodate about 70 thousand fans, so it makes it one of the largest football arenas in the entire Europe.

Interesting and informative 40-minutes tour will impress you with remarkable facts about stadiums history and the famous people who ever played here, including the legendary Ukrainian footballers Andriy Shevchenko, Oleg Blokhin and Igor Belanov. Moreover, you will get a chance to explore the modern territory of the stadium; changing rooms with showers, where players spend time preparing for the game, and enter the spacious arena.

NSC Olimpiyskiy is quite famous worldwide as it hosted the UEFA Euro 2012 games, including the final match. You will get a chance to see a 15-minutes movie about the last renovation of the stadium and the preparation for its official opening.

At the end of the impressive tour, you will get enough time to visit a gift shop and buy some unique souvenirs with NSC Olimpiyskiy logo.