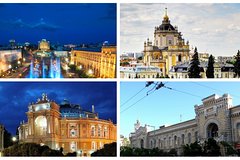 "Highlights of Ukraine & Moldova" tour will show you the edge of Eastern Europe. First you will see three main Ukrainian "capitals": Kyiv - the capital of the country, Lviv - the western "capital" and main city in Halychyna subregion and Odessa - the southern "capital" on the Black sea coast. Ethnic villages, mixed architecture, multinational cuisine and drinks - all these will immerse you in special and unforgettable Ukrainian lifestyle. After that you will travel to Moldova - attractive tour destination, especially for those who appreciate quiet tourist paths, rich culture and good wines. Also you will see the last soviet country in the world - Transnistria, where you can still find the spirit of the soviet past .

Day 1: Day 1.ARRIVAL IN KYIV& ACCOMMODATING AT THE HOTEL

Pass By: Kyiv city, Kyiv, Ukraine, 02000
Arrival to Kyiv, meeting at the airport.

Transfer to the hotel and check-in.

Bus sightseeing tour Kyiv, the City of Legends sightseeing tour. See this powerful and glorious city in all its beauty: Podil, Pechersk, Lypky, the picturesque banks of the Dnipro River, and the Maidan Nezalezhnosti.Theres nothing like Kyivs panorama, with its golden-domed churches. Next, we descend to Khreshchatyk with its chestnuts and fountains, the heart of Kyiv and probably of all of Ukraine.

Walking tour to the Kyivs city center Kyiv through the Ages. As you explore Kyiv through the ages, you will see some of the most wonderful monuments and sites in the capital of Ukraine. Here is Kyiv close-up: The Zoloti Vorota or Golden Gates, St. Sofia Cathedral, the old citadel whence the land of Rus began, Andriyivskiy Uzviz with its beautiful Andriyivska Church. You will see for yourself why Kyiv is called both ancient and eternally young!

Transfer to hotel of free time.

Explore Kyiv by your own. You can spend this day discovering the attractions of Kyiv on your own: visit some of its diverse museums or art galleries, enjoy the walking in city parks or buy tickets to Kyiv Opera House.

Also, we can suggest you:
- visit Chornobyl. Chernobyl and Prypyat are not objects for all tourists. If you visit these places, you will never be the same again. Some time ago on the worlds map appeared Chernobyl and then Sarcophagus  the monument of the human carelessness. It is a story of the largest technological disaster, the spirit of dead city will give you a feeling of a joy life and apocalypse. The exclusion zone atmosphere gives you a clear understanding of price of the human failure.
- Shooting tour. We accompany our clients to a Shooting range on the outskirts of Kiev, where you will learn about the safe and professional use of firearms. Under the supervision of well-qualified instructors you will practise shooting using legendary Soviet weapons such as the AK-47, AKSU, world-famous weapons such as the M-16 rifle and Mosina rifle, and the latest Ukrainian semi-automatic Z-10 rifle, which is an adaption of the American AR-15.

Check  out from hotel.

Arrival to Lviv. Check  in.

Spend your free time in of the most interesting Lvivs gastro tour (optional):
- Coffee legends of Lviv. The history of coffee in Lviv dates back to the 17th century, and for centuries there have been traditions of brewing coffee. It seems impossible to imagine medieval streets without a fragrant aroma of coffee, because in Lviv the morning begins with "figurines" of fragrant coffee...
- Lviv Gastro Tour. During your gastro-travel, you will visit the residence of the Lviv Kata, or, as it is called, "Lviv municipality of execution of sentences", you will taste the famous "sausage Kseni"; also - visit the most expensive restaurant in Galicia, where the zeros in the check book have their magic feature; You will be able to compete for your lunch in the famous "Jewish Knife", where you will be able to use all your skills in the hiking trips to the grocery market; You will have a real Galician hunting cuisine in the restaurant "Panskaya Charkaya", and all this way will accompany you to this Lviv coffee! ..

Sightseeing tour by bus around Lviv, the cultural center of Western Ukraine and the modern-day capital of Halychyna. Sometimes called Little Paris, Lviv welcomes guests with its Medieval beauty, preserved in buildings from the 14th and 15th centuries, Gothic churches and narrow cobbled streets. Among the sites it is worth to visit the Church of Sviatoho Yura or St. Georges Church, the Lviv Polytechnical Institute, the Organ Hall, and the buildings of the one-time Halych Sejm or legislature, prospect Svobody (Liberty Ave) and Adam Mickiewycz Square.

Lviv City center walking tour where you will get to know the spirit of Lviv and of it's large number of wonderful buildings and monuments, the real pearl of this hospitable legendary town.

Sightseeing tour by car/bus around Odesa. Odesa or Odesa-Mama, as it is called by the citizens themselves - the largest Ukrainian city-port on the Black Sea is simultaneously one of the most interesting and attractive places. During this trip we will visit and see the most important and beautiful places of Odesa - Philharmonic Theater (former Stock Exchange), old district Moldovanka, Arkadia city resort, French Boulevard, Pushkinskaya street, Potemkin stairand Passenger terminal in Odesa port.

Check-in to hotel. Time for lunch

Evening walking excursion in the city center. You will visit the historical places of the city: walk along the streets of Pushkin, Rishelievska, Lanzheronivska and, of course, along the central street of Deribasivska with unique architectural and historical monuments. The most beautiful Odesa Opera and Ballet Theater, the Vorontsov Palace, the cozy corner of old Odesa and the Shah Palace.

You can spend this day discovering the attractions of Odesa on your own: visit some of its diverse museums or art galleries, enjoy the walking in city parks, visit catacombs (longest underground tunnels) or buy tickets to Odesa Opera House.

Arrival to Chisinau. Check - in.

Sightseeing Walking City Tour of Chisinau. The best way to explore Moldovan capital  is to enjoy 3 hours walking within the Historical Center of the City. It is quite small  so you wont get too tired, but in the same time is quite big and you can easily get lost in its narrow streets full of hidden treasures. In comparison with large and busy Ukrainian cities, Chisinau will surprise you with its slow pace of life and quiet green streets. You are going to see the official part of the capital, all main state institutions, main boulevards, and a less official part  of small houses, that remind the times, when Chisinau was just a small village. The Glory and Tragedy of this City were always going side by side and within our city tour you are going to discover just a part of its controversial history.

Curchi Monastery excursion  perhaps, the most beautiful monastery of Moldova. It is situated between a small Moldovan village and the forest area. Its biggest Church is the exact copy of St. Andrew Church in Kyiv. The monastery looks like a small fortress and within one hour you will be able to enter in all 5 churches, and if youll be lucky enough  then you will even hear the fabulous singing of the local choir.

Old Orhei Complex excursion. It is worthy to mention that about 10 million years ago Moldova was covered by Sarmatian Sea, and Old Orhei is just a complex of huge rock hills formed by millions of fossils. It is a sacred place  as a home for the most legendary cave monasteries of Moldova. Here, you can taste the most delicious Moldovan food and drink a glass of home made wine.

Cricova Winery tour  the biggest Winery of Moldova and in the same time  the biggest underground wine cellars in the world! Cricova produces more than 10 millions bottles of wine every year! Within one hour tour you will see how this huge complex works, what movies their cinema is screening and of course, you will taste the wine Cricova!

Transfer back to the Hotel.

Transnistria tour. The last day in Moldova is giving you the chance to visit another country without leaving its official border. How is that possible? It is simple, we are going to take you to the unrecognized country called Transnistria, on the left side of Dniestr River  an absolutely unique and peaceful region. It is a travel back in time, as far as Transnistria is considerate  the last soviet country.We are going to visit Bender Town and its one of the biggest fortresses in Europe. Bender is populated by three ethnic groups: moldovans, russians and ukrainians and you will see, that Bender is just a smaller version of Chisinau. Next destiantion  is the capital, Tiraspol. Its main street is full by imperial monuments, Stalins buildings, large squares and of course  the monuments of Lenin. If you are expexting to see one grey boring town  be ready to be surprised, as the colours of Tiraspol will fascinate you.


Meals included:
• Breakfast
No accommodation included on this day.