Full-Day Missile Base Tour from Kiev 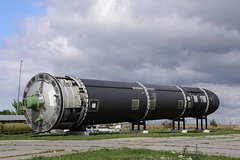 Full-Day Missile Base Tour from Kiev

Youre the one who can bring this world to an end!  Thats the feeling you get when you press the button in the missile base control center 40 meters below ground. The systems start to yell and you see the silos open and in 10 seconds all 10 rockets are in the air. Thankfully, these systems were never in use, but the experience of visiting the only missile base museum in the world is REA.

It is the year 1971, cold war; The Soviet Union is building strategic missile bases all over the territory of the republics of Russia, Belarus, Ukraine and Kazakhstan. All bases are equipped with dozens of nuclear warheads. Many of these missile troops are still in operation and you will visit the only one which is now opened to the public. The Museum of Strategic Missile Troops, founded in 2001 near the Ukrainian city of Pervomaysk (south of Kiev) is a Missile base completely equipped as if it is in use. The 3 hour excursion around the Missile base makes you think, how close was the world to destroying itself. The Soviet prime minister was able to launch four of the most powerful rockets from the Moscow area by a push of one button. Automatically, missiles from all over the whole USSR could have been launched to the pre-set targets. After the official foreclosure of the 46 Missile Division of Strategic Armed Forces in 1999 the target names were uncovered and now we know that the missiles from this base were aimed at US and Europe strategic objects.

11:00-12:00 Visiting museum part with your local guide - explaining the history, use and deactivation of nuclear missile bases around ex-Soviet union

17:30 arriving back to Kiev - Central Railway Station - KFC restaurant (or your Address or agreed drop off point - e.g. Airport)