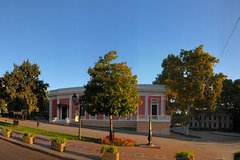 This group walk provides an exciting journey into Odessas early days. Youll walk in the footsteps of Odessas early settlers, including Italians, Greeks, French and Jews. They arrived in the frontier of the Russian Empire and made the «Odessa project» happen. This walk takes you through the neighborhoods of the city center, soaked in history and packed full of the most entertaining stories. After all, it cant be any other way! Odessas foreign settlers were adventurous and entrepreneurial people.

Well walk through Odessas Palais Royal and through one of the finest and longest streets once called Italian. Well see the first English mens club. Totally off the beaten track Greek street and La Strata Ribas  that part of it, which starts with the statue to Odessas founder in his actual size (I bet youll be surprised to see how he looked). Youll enjoy this walk. It will make you forget that you are somewhere there..in Eastern Europe.. traveling. Youll feel at home!

Hidden behind the marvelous facade are the exciting stories of Odessa's Golden Age and bohemian names, who visited it and contributed to the city's heritage

The most famous and touristy street boasts a few secrets, which we'll crack during this walk