The best of Slovakia in two days 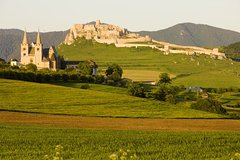 The best of Slovakia in two days

Travelling across Slovakia, well show you the most interesting places we can fit into two days.

a lot of the country and its diversity in just two days.

Pass By: Bratislava Old Town, Bratislava Slovakia
On the first morning, its vital that we leave no later than 9 oclock.

Stop At: Orava Castle, 02741 Oravsky Podsamok, Oravsky Podzamok Slovakia
Well drive about two hours and half, passing two large castles in western Slovakia: Trenčin and Beckov. We'll stop to visit one of the most beautiful castles in Slovakia: Oravský hrad, where one of the first ever vampire movies was filmed  Nosferatu (1922).
The castle, built on a rock above the river Orava in Oravský Podzámok village like an eagle nest, is one of the greatest tourist attractions of Slovakia, but not only.
It was built in the place of an older wooden hillfort after the Tartar invasion in 1241. Through the following centuries, this small fortress transformed into an extensive castle structure with 154 rooms.
Since 1556, the castle was administered by Thurzo family who initiated the greatest rebuilding actions in its history. The castle then acquired its final form in 1611.
Duration: 2 hours

Stop At: Levoca, Levoca, Presov Region
Instead of the castle we'll visit another UNESCO heritage site, medieval town Levoca, located close to Spis castle.
Levoca town was inscribed on the UNESCO World Cultural and Natural Heritage List in 2009 for its well-preserved original Medieval core, dating back to the period between the thirteenth and sixteenth centuries, including the town fortifications and the Church of the St. James. The church boasts ten Gothic altars, the main altar being the real magnet for visitors. With a height of almost 19 metres, it is a masterpiece of Master Paul, dating back to the sixteenth century.
Next, we head through the Low Tatras National Park on our way to Banska Stiavnica town.
Duration: 2 hours

Stop At: Banska Stiavnica, Banska Stiavnica, Banska Bystrica Region
A two-hour journey takes us to the town of Banská tiavnica, next UNESCO Heritage site we'll visit. Well take in a tour of this picturesque town, then have a short break.
After the tour, well start heading back towards Bratislava, passing one the oldest castles in Slovakia, Nitra castle.
Expected arrival back in Bratislava: 6 pm
Duration: 2 hours