Presov - the best of 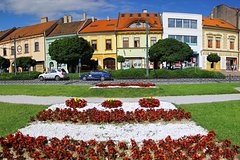 Presov - the best of

Preov is the town with an interesting past and dynamic present and mixed Slovak, Polish, Ukrainian and Ruthenian population is the metropolis of the north-eastern Slovakia. Preov is the centre of the Eastern District of the Evangelical Church of the Augsburg Confession and the educational centre of the region. The buildings in the historic centre are parts of the Town Monument Reserve. The monuments of Preov are concentrated into its historical core stretching around Hlavná ulica street, which widens into the spindle-shaped square. Its dominant is the parish church of St. Nicholas from the mid-14th century with a tall tower reconstructed in the Gothic style.

Dominant of Presov is the parish church of St. Nicholas from the mid-14th century with a tall tower reconstructed in the Gothic style.

The orthodox synagogue was built in 1898. It is one of the biggest and nicest synagogues in Slovakia.

One of the nicest buildings in the historical centre of Presov.

A rich Jewish merchant Mark Holländer initiated the sculpture of Neptune in the early 19th century.