Mysterious castles near Bratislava including hiking 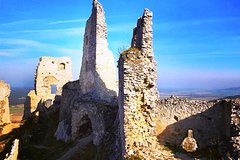 Mysterious castles near Bratislava including hiking

Highlights :
* mysterious castles of the Little Carpathian mountains
* hiking to the most beautiful mountain of the Little Carpathian mountains
* the most eastern place with the presence of menhirs in Europe
* Celtic settlements
* the oldest church in Central Europe
* sweet mead tasting
* tasting the Skalický trdelník, an interesting pastry in shape of a roll with a hole inside

We will take a road trip through Bratislava´s outskirts along a winding road through the pine forest overlooking the gently rounded hills of the Little Carpathians.

Hidden among the landscape are mysterious castle ruins, perched on rocks whose ancient strength you can test while climbing and admire from above while paragliding.

Harken to a story, a Slovak remake of the Trojan war, involving the kidnapping of a beautiful woman and the epic struggle to free her.

Wander enraptured among a sea of white snowdrops beyond counting will carpet your way.

Return to the past and feel time stop listening to the wind whisper through the blades of an historic windmill.

Gaze awestruck before the oldest church in Central Europe, a Romanesque building standing alone in a field of wheat.

Ramble along the cobblestone streets in the westernmost royal Slovak city, birthplace of the best Slovak ice hockey player, a hero of the Slovak national sport.

Finally take the helm of your boat on the Bata canal. Does the name Bata ring a bell? Look to your shoes. Who was he? The Czechoslovak Henry Ford