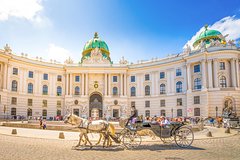 Meeting with your driver at hotels reception. Transfer to Vienna.

Vienna and Bratislava are two closest capital cities in the world. Both cities are „crown cities, as in Vienna were crowned Austrian Emperors whilst in Bratislava were crowned Hungarian Kings. Meeting with your guide in Vienna, Grand City Tour in Vienna (1 hour by car + 2 hours on foot). A drive along the Ringstrasse gives you the opportunity to see the city`s most significant historical sights. Afterwards, take a short walk around the most beautiful parts of Vienna: Hofburg, Kartner Strasse and St. Stephans Cathedral.

Free time in Vienna  4 hours, possible to visit in this time Schonbrunn Palace.

private one day trip Imperial Vienna is the best way how to get know also "older cuisine" of Bratislava during your stay in it.