Highlights of Slovakia in 3 days 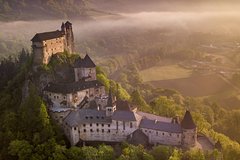 Highlights of Slovakia in 3 days

Traveling across Slovakia, well show you the most interesting places we can fit into three days. On our tour, well see several castles, go through four national parks, sample Slovak cuisine and enjoy breathtaking views!

On this trip you will see:

a lot of the country and its diversity in just three days.

Stop At: Cicmany, Cicmany, Zilina Region
The unique and characteristic element of log houses in Čičmany are their exteriors ornamented in geometrical pattern. The authors of ornaments, as rule, were women who originally adorned only the corners of houses first with mud and later with lime.
The painting was intended to protect the logs against the effect of sunrays. Geometrical ornamentation was also used in embroidery applied to garments, pictures or tablecloths. The Reserve counts 136 houses.
Duration: 1 hour

Stop At: Orava Castle, 02741 Oravsky Podsamok, Oravsky Podzamok Slovakia
Well drive about two hours, passing two large castles in western Slovakia: Trenčin and Beckov. We'll stop to visit one of the most beautiful castles in Slovakia: Oravský hrad, where one of the first ever vampire movies was filmed  Nosferatu (1922).
The castle, built on a rock above the river Orava in Oravský Podzámok village like an eagle nest, is one of the greatest tourist attractions of Slovakia, but not only.
It was built in the place of an older wooden hillfort after the Tartar invasion in 1241. Through the following centuries, this small fortress transformed into an extensive castle structure with 154 rooms.
Duration: 2 hours

No meals included on this day.
Accommodation included: Overnight at 4* hotel with breakfast

Stop At: Spis Castle, Namestie Majstra Pavla c.40, Zehra 053 04 Slovakia
In the morning well visit Spis Castle, one of the largest mediaeval castles in central Europe. This castle is the largest in Slovakia and belongs also to the largest castles in Europe. The oldest writing about the castle is dated on 1120. The castle is listed in the historical heritage of UNESCO.
Unfortunately from November till March the castle is closed because of weather conditions.
We'll drive around and you'll see this castle from outside. But we'll visit another medieval town next to the castle, Levoca, also UNESCO heritage site.

You have two options here:

We can visit Spis castle and then visit next UNESCO heritage listed town Bardejov or from the Spis castle we can go back to High Tatras Mountains and spend there a rest of the day.

We can take a cable way on a peak or we can take a some easy hike to waterfalls.
Duration: 3 hours

Stop At: Bardejov Spa, Bardejovske Kupele 086 31 Slovakia
If you decided for next medieval town we'll drive about an hour to visit medieval town Bardejov, registered on the World UNESCO Heritage list. One of the most interesting buildings is the town hall, built in 1505 and the gothic church. The Bardejov spa has played host to a number of dignitaries, including Marie Louise (the wife of Napoleon Bonaparte), Tsar Alexander I. of Russia and Empress Elisabeth, Sisi, of Austria-Hungary.
Duration: 2 hours

Stop At: Vlkolinec Village, Ruzomberok 034 01 Slovakia
Vlkolinec is a typical Central European mountain hamlet with log houses. It consists of the best-preserved example of an authentic mountain hamlet in Central Europe.
Wooden houses and wooden belfry, dating back to 1770, while the other one is a wooden well, dating back to 1860.
Duration: 1 hour