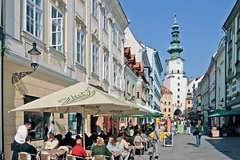 It is short but instructive walking tour, shows you the most historical and important sites of Bratislava old city. House of Opera, Old Town Hall, Michael`s Gate and unique St. Martin`s Cathedral are at the heart of Slovakias capital city. From the glamourous days when Bratislava was a capital city of Hungarian part of Habsburg Empire, to the darkest times of war, when Bratislava`s district Petrzalka was part of Third Reich, Bratislava has continuerd to be one of most cozy cities in the world.

Whether you would like to spend your time by visiting royal palaces, listening classical music, learning about the way of Slovak independence, or eating traditional Bratislava` rolls, or drink local wine, Bratislava has something for absolutely everyone. On our you will see the most of Bratislava attractions and have a feeling how it is to be a real local.

lassical Walking Tour in Bratislava starts with meeting with the guide at 12:00 pm in front of Park Inn Danube Hotel, Bratislava. Short basic introduction of Bratislava and Slovakia. The guide will open up you history of one of the most youngest capital cities, and states of Europe, Bratislava & Slovakia. You will hear about ancient history of Slovakia, when the old Slavs, the precedessor of modern Slovaks inhabited Slovakia and created Great Moravia Empire, thru times when Slovakia was part of Hungarian and afterwards

They tell you legends from time when Bratislava was capital city of Hungarian Kingdom, and Hungarian kings and queens were crowned there. The story continues to time of first Czechoslovakia and during II. W.W. time of controversial Slovak war state. You will also hear about the darkness of times of comunism in Slovakia and also about the hope which brough Velvet revoultion. The result of Velvet revolution was at the end independet Slovakia, since 2004 the member of European Union.

You will discover Opera House and house of Reduta continue to Main Square, pass by Old Town Hall. On Franciscan Sqaure you will see the oldest building of Bratislava Franciscan Church. Walking tour goes on to Biela Street and Michalska Street with one of the dominants of Bratislava Michael`s Gate. Pass by historical buildings and palaces in Venturska Street and Panska Street. City tour finishes at St. Martin`s Cathedral.