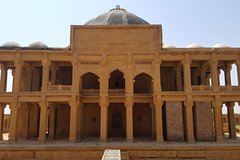 There are three UNESCO World Heritage Sites at the outskirts of Karachi about 100 kilometers drive, First one The Chaukhandi Tombs about 29 kilomterers east of Karachi were built between the 15th and 18th centuries,the Chaukhandi Tombs now form a remarkably well-preserved necropolis that often attracts curious visitors and archaeologists and photographers alike.
Second on the list of UNESCO site is Makli Necropolis further east Covering more than 10sqkm,is one of the worlds largest necropolises,acting as the final resting place of more than half a million people,including kings,queens,saints and scholars.The necropolis rose to importance as a burial site between 1352 and 1524,when the Samma Dynasty made Thatta their capital.Third on the list is Shah Jehan Mosque of Thatta built in the reign of Mughal emperor Shah Jahan,the combination of red bricks and blue-colored tiles,the mosque has 93 domes and 33 arches.the foundation of the mosque was laid in the year 1644,

Traveler would be picked up from the designated pick up point at the time mutually agreed upon,would travel east of Karachi about 29 Kilometers to Chaukandi tombs located in the suburbs of Karachi, about 70 Kilometers further east will stop at Makli Necropolis, the route is out of Karachi and traveler would see glimpses of Village life along the way,after visiting Shah Jehan Mosque in Thatta about 10 kilometers from Makli, we would head back to hotel/drop off location