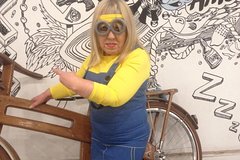 There is nothing worse than turning up in an unfamiliar city and spending all night wandering the streets looking for somewhere suitable to have a few drinks. So, why not have someone dressed as a Despicable Me minion take your group on an unforgettable adventure around the best bars in Amsterdam?

Your guide meets you at your hotel and takes you to a bar in the city. Here the Despicable Me minion will appear and handcuff herself to the unsuspecting stag. For the next three hours your group will hop around bars in the Red Light District.

With the minion by the bachelors side, there is no way that the group can get lost or split through the busy alleys of Amsterdam. Plus, the minion will issue the stag with assignments throughout the tour.

At the end of the night, there will be a farewell performance.