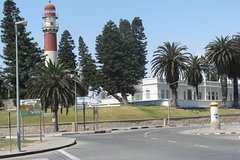 Swakopmund, known as the prime holiday resort of Namibia, was founded in August 1892 by the German Colonial Reich. For many years this town was the main harbour for the territory, being served by the mole and later the jetty. Both these structures still exist. Many historical buildings dating from that area are still being used and are rated as historical monuments. The distinct German Colonial character of Swakopmund has been well preserved and is undoubtedly a key attraction for tourists and entrepreneurs.
The walking tour of Historical Swakopmund concentrates on the historical part of Swakopmund. Your guide will relate the history of Swakopmund and explain the origin of the various historical buildings in town. However, the tour is not confined to the historical center, but also includes the northern suburbs and the townships which we will visit by motor-vehicle.

Swakopmund used to be a harbour town and construction of the iron jetty was commenced in 1912 after the original wooden jetty became unsafe. The rocky area contributed to major difficulties during construction and the building contractor was forced to develop a drilling programme to overcome these obstacles. When the First World War broke out, the jetty was left uncompleted and extended to only 262m. of the planned 640m. In 1919 the northern side was covered with wooden planks for use as a promenade by pedestrian and anglers. The jetty was built to such high standards that it endured the merciless pounding of the Atlantic for over 70 years. After some extensive repairs around 2000 it now carries a restaurant at its tip and continues to feature as a famous landmark of Swakopmund.