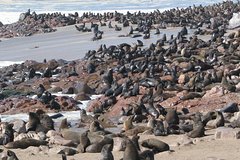 Our clients get to see some 80,000 to 100,000 Cape Fur Seals at close quarters. This is an experience of a lifetime. During October, large adult males haul out to establish breeding territories, and those that do, stay for six weeks or more. The bulls expend considerable energy reserves and lose weight establishing and maintaining territories, herding females and fighting other males. A single pup is born in late November or early December and during a 34 - day period, 90% of the pups are born. The black pups suckle soon after birth and the females remain with it for the first week. This close association establishes a strong maternal bond between the pup and its mother. The initial bonding period is very important as it enables her and the pup to identify one another amongst the thousands of other seals. Without milk from the females, the pup's chances of survival are virtually nil. When they are separated the mother bellows for her pup and miraculously they find one another.

We travel along the coast in a northerly direction and visit some salt-pans where Flamingos can be seen. We continue along the coast and stop once more to take a closer look at a ship wreck. We also inspect some lichen-fields next to the road. Afterwards we proceed to the Cape Cross Seal Reserve. Here in 1486 a Portuguese explorer named Diego Cao, the first European to set foot in Namibia, erected a stone cross in honour of King Juan I of Portugal. Today there is a large colony of Cape Fur Seals which can be viewed at close quarters and is an experience of a lifetime. Since the introduction of legislation controlling the utilisation of seals in Namibia in 1922 the seal population at Cape Cross has increased to more than 250,000. Our return journey to Swakopmund includes a short sightseeing tour of the small holiday resort Henties Bay. Henties Bay developed from a mere sprinkling of fisher huts into a very popular holiday resort within a few decades.