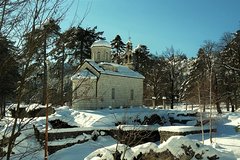 This tour highlights Cetinjes important historical and cultural heritage and its rule through Montenegros difficult medieval period. You will come across old Montenegrin institutions that today represents museums of an era gone by and the ancient monasteries. Our tour guide will take you to the monastery of Cetinje also known as monastery of Petar I Petrović. This was built in the early 18th Century. You will visit castles from the 19th Century such as the new castle, Biljarda, dedicated to our ruler and poet Njego. From here you will continue walking towards the King Nicholas palace, which is today a museum. It showcases trophies from different battles, and you can walk through the rooms where King Nicholas used to live with his family. After the visit to the castles, our tour guide will take you to the old parliament building that is today the National Museum. This museum holds one of the most important relics of Christianity, Our of Virgin Filermosa.

During this 30 minute walk, we will visit the 19th-century castle built through the reign of Petar II Petrovic Njegosh, also known as the New castle or simple  Biljarda named by the Njegosh favourite hobby billiard, that he used to play in one of the rooms of the castle. This beautiful and unusually shaped castle has 25 rooms that are used as an exhibition room in this present day where they showcase the history of his reign, his work as a leader, his poetry and books that has placed him on the first place among all the southern Slavs writers.

We'll enter King Nicholas palace, which converted today as a museum. The first floor showcases trophies from different battles, ethnic uniforms of old Montenegrins first coin money and stamps of Montenegro from the beginning of 20th-century.The second floor is originally preserved from the period when King Nicholas used to live here with his family. You will hear the story about this charismatic leader, about 50 years of his reign, as well as stories about the life of his family through their rooms, beautiful dining room, diplomatic saloon and others.

After the visit to the castles, your tour guide will take you to the old parliament building that is today the National Museum. We will visit its a museum of arts where you will find the paintings of famous 20th century Yugoslavia artists, and the work of most famous Montenegro painters. Lastly, you will have a chance to see its a most important relic, one of the most important relics of Christianity, Our of Virgin Filermosa, that has passed long and turbulent way before coming to the Old Royal Capital Of Montenegro.