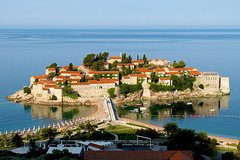 If you will stop in Kotor by a cruise ship and have limited time for dicover the amazing beauties of Monetenegro, this tour itinerary is one of the best options. Discover the Montenegro with local guides.

You will be met at Kotor Port by your professionally trained guide and drive along the bay to the charming village of Persat approximately 30 minutes away. Here, your guide will lead you on a brief overview of this onetime fishing village and give you some free time on your own. You will then drive to the nearby ferry pier and cross to the other side of the bay where you will continue on to the Montenegro Riviera. During a scenic drive along the coast you will overlook St Stephan's, a small village turned into a very exclusive resort. You will then continue on to the seaside town of Budva. In Budva, your guide will lead you on a short walking tour of the old town area and adjacent seaside before giving you some free time to explore on your own, or to purchase a drink in one of the many cafes along the seawalk. You will return to Kotor where you will depart your transportation and take an approximately 50 minute stroll through the UNESCO World Heritage site of Kotor. The town was first mentioned in 168 BC, and was settled during Ancient Roman times, when it was known as Acruvium, It has been fortified since the early Middle Ages, The city became part of the Venetian Republic in 1420 and except for two periods of Ottoman rule, it remained under Venice until 1797, It is these four centuries of Venetian domination that have given the city the typical Venetian architecture. It served as a naval base during World War I and luckily avoided any serious damage from either World War. Kotor has one of the best preserved medieval old towns in the Adriatic and is home to several sights of interest, including the Cathedral of Saint Tryphon (1166), and the ancient walls which stretch for 3 miles on the steep hillside directly above the city. Your tour ends within the ancient city. From here, your guide can make suggestions for further sightseeing, shopping or show you the gate that leads to the cruise pier across the street from the Old Town. Afterwards you will back to port of Kotor.