The best of Chisinau walking tour 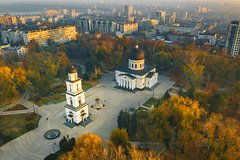 The best of Chisinau walking tour

Do you know Moldova once produced nearly two-thirds of all wine which was consumed in the Soviet Union? Do you know that the wine cellars of Cricova are the second largest wine cellars in the world? No, then visit to the Cricova Underground Wine Cellar should be the number one thing you do in Chisinau. With the wine, do not forget to taste Traditional Moldavian food- it will leave you amazed. One of the main attractions of Chisinau is the cathedral of the Moldovan Orthodox Church. Do you know that it was built in neoclassical design in the 1830s? Incredible isnt it? A local charismatic guide will reveal the secrets and interesting facts about the National Museum of History of Moldova, Parliament, and National Museum of Fine Arts Chisinau.