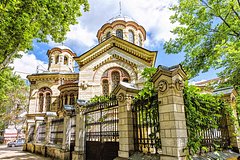 To explore Chisinau walking is the best way. Get ready to lose yourself for a couple of hours and wander through Moldovas fascinating past. Chisinau Circus is one of the most impressive buildings in the whole city. It represents a very interesting and original architectural style, being part of the Soviet past. Do you know that this circus was making from 36 to 57 performances per month? Crossing Grigore Vieru Blvd finds a minute to stop in the local restaurant and taste real Moldavian food, it is just amazing! The local Moldavian guide will revile the most amazing stories about Government House, Parliament, Lenin Monument, and Victory Memorial. You will be impressed with the notorious buildings -landmarks of Soviet Modernist Architecture. Can you believe that in Valea Morilor Park were living the mammoths? This park is not only a fascinating place but if you will talk with locals you can hear quite interesting stories which will leave you impressed, no doubt!

*Discover secrets of the Government House, Parliament, Lenin Monument, and Victory Memorial
*Get impressed with the notorious buildings -landmarks of Soviet Modernist Architecture