Return to the USSR - Excursion in Transnistria 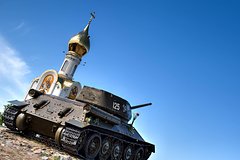 Return to the USSR - Excursion in Transnistria

The Republic of Moldova was Soviet for almost 50 years and it has left its mark, one is Transnistria. And why not a trip to the pro-Russian separatist region of Transnistria? A small return to the USSR for a day, to say "I was there" .., to discover a territory without territory ... .., a country without a country ...

The political situation is still complex today with Moldova, the tension is palpable but not dangerous for a foreign tourist. Visiting Transnistria is possible because it is not instinctively against tourism.

Our agency organizes this trip with a mixture of discovery, pleasure of the palate and meeting with the soil. You will be able to discover the authentic aspects of a region still under a model that was thought to be out of date.

Tiraspol is considered the capital of Transnistria, a city that has preserved the Soviet symbols of its past with the monuments of Lenin, the administrative buildings of Soviet architecture and with the tank in the city center. This assumed nostalgia is reflected directly on the flag of the country which is unique in Europe.

The city Bender also called Tighina is the second largest city in Transnistria that attracts thanks to its medieval fortress - one of the most powerful elements of the grandiose defensive system of medieval Moldova.

The village of Chitcani holds the largest religious architectural complex of the Republic of Moldova called Noul Neamt or "the daughter of the Neamt monastery in the Carpathians of ancient Moldova".