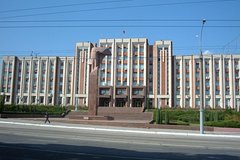 This private tour in Moldova is focused on the non-recognized by the Moldavian authorities Republic of Transdniestr.

This private tour in Moldova is focused on the non-recognized by the Moldavian authorities Republic of Transdniestr. Most foreigners know it under several other names: Pridnestrovie or Transnistria. It is situated on the eastern bank of the river Dniestr. Some people consider that Transnistria is the reason for continuous conflicts between the Moldavian authority and several other countries.

However it is definitely an interesting place to visit, thats why it is a very popular tour among various other private tours in Moldova. It is interesting that most foreigners after visiting Transnistria have an impression that it is an open air museum of the Soviet Union and the Communism regime. Tour with private guide in Chisinau. There are numerous relics from the Soviet times in Transnistria. In fact it is a country that doesnt exist, because it is not recognized by anyone.

We will visit two biggest towns in the republic  Tiraspol and Bender. You will notice numerous streets with soviet names, monuments to the father of Communism  Vladimir Lenin and the memorial to the Civil War, the Afghan War and W.W.II.