Moldova, Transnistria and Romania 3 countries in one trip! 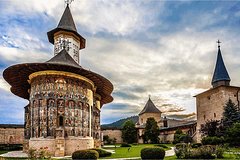 Moldova, Transnistria and Romania 3 countries in one trip!

Combined tour of Moldova Republic and Bucovina  the region of Romania. Moldova is a country where dreams come true, a place where fairy tales turn into reality. Old monasteries, slumberous forests, famous vineyards and cellars, endless hills, fair sky, and friendly sun give a special charm. Bucovina is world known for outdoor painted monasteries, included in UNESCO  Heritage List.  People from Moldova and Bucovina are famous for their hospitality. The Republic of Moldovas wine enjoys a good reputation internationally for its quality. Wine tasting tours in Moldova are very popular. TIRASPOL is the biggest city in Transnistria. The city is located on the eastern bank of the Nistru River.

In just 30 minutes from Chisinau (capital of Moldova) is the worlds largest and one of the most famous underground wine complex of Mileşti Mici. Mileşti Mici is a titleholder in the Guinness World Records as the largest wine collection in the world. It is composed of 250 kilometers of subterranean galleries (only half of which are used) that reach as far as the edge of Chisinau. The collection holds over 1.5 million bottles of wine.
Duration: 3 hours

Stop At: Museum of the City of Chisinau, A. Mateyevich st., 60a, Chisinau Moldova
Places of interest: historical centre of Chisinau with its administrative and cultural edifices along the main boulevard of Stefan cel Mare, the main square of the General National Meeting, public parks, churches and museums of the city, Central Market and the market of crafts and souvenirs, W.W.II memorial Eternitatea, buildings of parliament and government.

Chisinau city is also named «Small Rome» because it is situated on 7 hills. The wide parks and avenues with very interesting architecture, a specific atmosphere that predominates here is very characteristic to this city.
Duration: 4 hours

of the wine of each type per person
Accommodation included: non

Day 3: Day 3: Iasi  an open-air museum all day. In the morning you moov to Romania.

Stop At: Iasi Tourist Info Center, Piata Unirii No. 12, Iasi 700056 Romania
Iasi is the largest city in eastern Romania, located near the border with Moldova. It has long been known as a leader of cultural, academic and artistic life in Romania and even served as the capital of the country from 1916 to 1918. Settlements in the area date back to the prehistoric age and the name of the town was first seen in records in the early 15th century, although many buildings still stand in the city that pre-date that. Iasi is home to the oldest Romanian university, the oldest and largest botanical garden in the country and
Duration: 8 hours

Stop At: Old Orhei, Orhei Moldova
Today well visit one of the most picturesque sites of Moldova  the Cultural and Natural Reserve «Orheiul Vechi» (Cave Monastery Complex)  55 km from Chisinau. Here you will see an Orthodox cave monastery called St. Maria Dormata expanded and modified inside the cliffs by the monks over the centuries ago and preserved in a functional state. After excursion, well have lunch with a folk program at the Moldovan family pension located in the neighboring village Butuceni.
Duration: 4 hours

Stop At: Kvint, 38 Lenin Street, Tiraspol Moldova
Kvint is a brandy distillery located in Tiraspol, the largest city in Transnistria. Kvint also produces vodka and wine. Founded in 1897, it is the oldest still-operating enterprise in the region. Initially, Kvint produced only vodka. It started to produce brandy in 1938.

Since then, Kvint has become well known in the region and around the world for its high-quality brandies, which it produces following classical French technologies. The brandies are aged in oak barrels for 3-50 years depending upon the product. Kvint offers daily guided tours and tastings that range in price depending upon the number of samples served and the quality.
Duration: 1 hour

Meals included:
• Lunch: Lunch in Tiraspol
No accommodation included on this day.