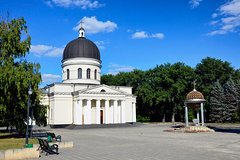 One of the greenest capitals in Europe, Chisinau, is currently the political, economic & social center of the Republic of Moldova. Not because it is big, but because this city, like its history, is so contradictory. From the very beginning, it seems that Chisinau is a rather typical former Soviet city, but do not hurry.

Historical Center of the city is divided on 2 parts, the older one with narrow streets of old small houses & the newer part of XIX-century.  If you think that soviet architecture is quite boring  Chisinau will prove you the opposite. This city definitely looks like European capital, but so many things there are so unique.