THE HISTORIC EAST COAST (*All Inclusive) 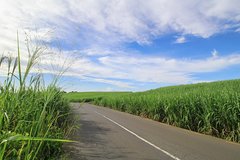 THE HISTORIC EAST COAST (*All Inclusive)

A rich stream of stories lies at the very heart of Mauritius.

The east coast is undoubtedly one of the islands most beautiful coastlines, set alongside emerald-coloured lagoons. Beyond its beaches and exquisitely blue waters lies a treasure trove of art and history just waiting to be discovered.

On this tour, we will take you and show you the very best of the east, including a boat trip to the isolated island of Ile Aux Aigrettes!

Start your morning by discovering the beautiful aquatic life that thrives in the turquoise waters of the east coast. Our glass-bottom boat tour at Blue Bay Beach will give you the tingling feeling to dive in the lagoon and snorkel up close to the beauty that surrounds you in paradise.

As the sun continues to rise, lets power up the engines to the charming isolated island of Ile Aux Aigrettes and discover the uninterrupted flora and fauna of the east scene of Mauritius. The park also serves as a home for several rare and endemic bird species, which visitors can spot while wandering through the tranquil forest comforted by melodious sounds. The reptile species include the large, slow Telfairs Skink, several species of ornately coloured day gecko, and a population of non-indigenous Aldabra giant tortoises that were brought to the island to take over the important ecological role of the extinct Mauritian tortoises.

Afterwards, we will visit the market of Mahebourg where you can try some of the best street food of the Island. Its a fantastic day out for everyone where over 200 vendors sell all manner of goods and crafts, from organic fruits and vegetables to products from local farmers.

Our next stop will take us back in time with a visit at the Rault Factory to discover how the Seneque family makes their unique biscuit of cassava. The biscuits are handmade from the cassavas that are grown in their surrounding garden, and the road that leads to the factory makes the visit even more pleasant as it is located in a quiet setting, surrounded by coconut, mango and cassava trees.

As we drive on the coastal road in the east of the island, we will stop over at the Hollanders Tower that was used by the Dutch in the 18th century as a vantage point to observe the bay of Grand Port for incoming ships. The tower was later used by the French colony that invaded the island to keep guard of the attacks from the British, which were more frequent and intimidating. Ever since, it has remained untouched and is a memorial from the olden times of the island. Visitors will have a deeper insight into the history with a visit at the Frederick Hendrik Museum.

Witness the untouched canons in the village of Old Grant Port where the Dutch first landed in 1598 under the command of Wybrandt Van Warwyck.