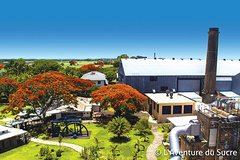 A Tour to Discover the beautiful North of Mauritius on its many sights.
As part of this tour you will visit many highlights in one day:
Caudan waterfront mall, port-louis market, citadel fort, SSR Botanical garden, Sugar estate & Museum, grand baie which is the most touristic area in mauritius and finally red roof church at cap malheureux.

Guests will see the caudan shopping mall and view of the harbour.

This is the local market.

Perched on top of the hill Petite Montague, the Citadel Fort is located at a height of 100 metres. Also known as the Adelaide Fort (named after the wife of William II, when the British held land in Port Louis), the fort offers stunning views of the harbour the local horse racing track (champs de mars) and the entire city of Port Louis.

The Sir Seewoosagur Ramgoolam Botanical Garden (sometimes shortened to the SSR Botanical Garden), commonly known as the Pamplemousses Botanical Garden, is a popular tourist attraction in Pamplemousses, near Port Louis, Mauritius, and the oldest botanical garden in the Southern Hemisphere. Famous for its long pond of giant water lilies (Victoria amazonica), the garden was first constructed by Pierre Poivre (1719  1786) in 1770, and it covers an area of around 37 hectares.

In addition to its giant waterlilies, the garden also features spices, ebonies, sugar canes, and 85 varieties of palms from Central America, Asia, Africa and the islands around the Indian Ocean. Many trees have been planted by world leaders and royalty, including Princess Margaret, Countess of Snowdon, Indira Gandhi, François Mitterrand and Robert Mugabe.

In its time, as coveted as gold, as sought after as Indian spices, as sweet on the palate as the silk on the necks of the women of the world, sugar has since experienced an extraordinary destiny, drawing on its roads a deep groove, which has marked the history and identity of Mauritius. It is this fabulous saga that is told at L'Aventure du Sucre and that made Mauritius what it is today, a harmonious, smiling, multicultural island.

We stop here to take pictures of the most popular beach in the north.

we stop at one of the most beautiful beach in mauritius.

We have one of the oldest and well maintained church in mauritius.