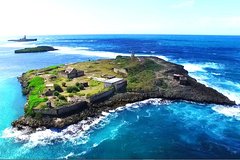 A 30 meters long white sandy island that appears at low tide and sometimes disappear at high tide just off the eastern coast.

A small island used by the French soldiers in the very beginning of the colonization of Ile de France. They used the island mainly as a quarantine island where most of the sick slaves and sailors went left before boarding the island. When the harbor was moved to Port-Louis, the island was abandoned by the French and used as a military base in the early 19th century. Between 20 and 25 August 1810, during the British campaign to capture the island (then called Isle de France) from the French, it was the scene of the Battle of Grand Port. This was a long and very hard-fought action between roughly equal forces of French and British frigates and, on balance, a defeat for the British, who lost four frigates, though one of these was subsequently recaptured. The French squadron did not survive the British invasion of Mauritius.

Also known as Ile aux Fouquets, Ile Aux Phare was amongst the first ones to be discovered in 1598 by the Dutch settlers. L'Ile aux Phare bears its name by virtue of a lighthouse built in 1864, which was still operational until beginning of the 20th century. Historically, Ile au Phare, situated within the bay of Mahébourg has fulfilled a strategic purpose during the naval battles at Grand Port.

Ile aux Aigrettes is an islet of 24.7 hectares in area, barely a kilometre off Pointe d'Esny, near Mahébourg, South East of Mauritius. Previously, during World War Two, the islet served as a military base by the British, who built 2 artillery pieces onsite, one of which can still be seen.

Efforts have been taken by the Government and the Mauritius Wildlife Appeal Fund to preserve the endemic fauna and flora. About 40 different species of endemic plants characteristic of the flora that once existed on the coastal mainland can be found on this island.

The progressive elimination of rodents has allowed the natural regeneration of many endemic plants and birds, like the Kestrel and the Pink Pigeon.

We have 1 hour of snorkeling around the island where some people can even do birds feeding within their hand.

Found South East of Mauritius, the Blue Bay marine park is framed on one side by Le Shandrani Hotel, Blue Lagoon Hotel and the runway of our international airport SSR. And sitting comfortably on top of the marine park is 'Ile des Deux Cocos', an islet within the lagoon, of 4.22 hectares. An important and very unique network of coral reefs protect this part of the island from the oceanic waves.