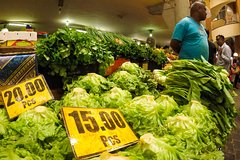 If you would like to know more about the local culture, Port Louis is the place to be.

Start your morning by capturing the lively spirit at the central market of Port-Louis. Meet with the locals, discover the Mauritian culture and feast on some of the best street foods that boast an influence of traditional flavors.

Founded in 1735 during the French colonial period, the citys foundation was laid and pioneered by then Governor Bertrand Francois Mahé de La Boourdonnais, giving the island its focal point for immigration and commerce.

Today, the bustling city retains most if not all of its historic roots and continues to be the hub of government and business.

The market atmosphere will boast a local experience for visitors. Its a fantastic day out for everyone where over 400 vendors sell all manner of goods and crafts, from organic fruits and vegetables to products from local farmers. Our guide will take you in the labyrinth of alleyways and sidewalks where you can easily pick up a souvenir, treat yourself to some delicious street food and sip on an Alouda at one of the street-side vendors.

Stroll along the waterfront and take in the view alongside the capitals harbor, admire artists at work in the beautiful alleys, pop into the arcades and shops and indulge in some shopping for gifts, jewelry or branded clothing for yourself or your loved ones.

Take a short walk away from Caudan Waterfornt to the other side of the harbor and discover the unique historical tale of how the island and this citys life all began.

The Blue Penny Museum is internationally recognized as a site of UNESCO World Heritage Importance and is dedicated to the history of the island and its cultures. In the museum, you will observe and discover preserved artifacts, factual literature and art. But it doesnt stop there. A special treat, especially for those fond of stamps, are two of the most expensive collective stamps in the world!  The Penny Blue and Penny Red.

The Appravsi Ghat depicts a historical tale of the first place of landing and depot for immigration controlled by the colonial British government in 1849. It has played a pivotal role in the Mauritian history, as it is from this very instance that the Mauritian population became more diverse than ever. Stroll through the memories area that showcases several historical images and displays that reflect the past history of the Indian immigratio

Lets take a walk to China Town, a wonderful opportunity to discover more about the Chinese culture that still reflects the past history of Mauritius, with small shops selling groceries and old buildings that represent their impressive history on the island. However, visitors will not see any playful pandas, but they can definitely feast on some tasty local street food as well as several varieties of homemade Chinese cakes.

Still feeling hungry? Lets head over to one of the most famous street vendors home to experience a short cooking session on how the traditional Dholl Puri is made. After a brief introduction from the local chef, visitors will have the opportunity to join in, prepare and taste the flatbread that is served together with butter beans curry and a nice Mauritian Rougaille (homemade tomato puree) and chili.

The next stops will be short visits to three of the most popular religious sites in Port Louis. The Tian Tan Pagoda, the temple of Maha Kali Mandhil (Hindu), and the Monumental Shrine of Marie Rene De La Paix, which offers wonderful panoramic views of the city.

We would not want you to miss the breathtaking views from the fort of Citadel. Rested on a hill, the fort was built in the 19th century as a lookout point against any form of foreign invasion to the island and city of Port Louis. The cannons (decommissioned) have remained to add to the attraction; they make a perfect backdrop for some great photo souvenirs.