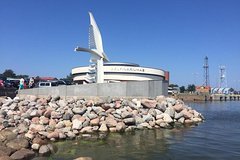 Lithuanian Maritime museum invites you to discover enriched expositions of marine nature and history and admire spectacular shows of the Black Sea bottlenose dolphins and California Sea Lions . Book in advance to guarantee easy admission to one of the most popular museum in Lithuania!

Newly renovated Lithuanian Sea Museum holds 6 expositions all very different and impressive. The main part of exhibits is gathered in the Nerija Fort, which itself is an exhibit of historic heritage as it is a military building erected in the 19th century.

You're invited to explore the sea fauna exhibition, see the collection of mollusc shells and exhibitions of sea birds, predatory and dangerous sea animals and the development of life at sea. Besides, the collections of the Museum include a variety of geological, archaeological, ethnographic, numismatic, cartographic, technical, writing and philatelic exhibits.

In the Lithuanian Sea Museum lives Baltic Sea grey seals, East Atlantic common seals, Stellers sea lions and penguins. Probably the most impressive moments are catched at the Dolphinarium, where the Black Sea bottlenose dolphins entertaining educational shows take place: they not only dance, sing, draw, and jump through hoops, but also warmly interact with the audience.

And finally the Aquarium, where are a great variety of exhibits including invertebrates, Lithuanian freshwater fishes, many fish species from the Baltic sea as well as from various tropical seas. Fishes and invertebrates are held and exposed in tanks that range from 1 to 6 m3.