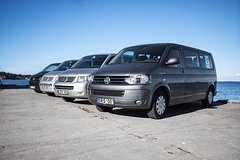 Discover the 100-kilometer peninsula of Curonian Spit National Park on this full-day private tour from Smiltyne. This UNESCO-listed site is known for its beautiful natural landscapes and rich cultural heritage of fisherman and ethnic Curonians. Explore all the highlights of the park such as the massive sand dunes, some of the largest in Europe, and the Nida village, on the border of Russia, before heading back to Klaipeda.

Amber Bay is associated with the beginning of amber mining around 1855. when the bottom of the Curonian Lagoon was deepened and they found amber. Nowadays, reed sculptures are being built through Jonine. They stay up to the equinox and then have a celebration to burn them.

A walk in the forest along a collection of quite nice and impressive wood-carved sculptures. They were made about 40 years ago and depict themes from the Lithuanian mythology.

Herons and Cormorants Colony of Juodkrante.

There are fabulous views of the Baltic and the Lagoon, but also the sheer size and immensity of the power of the dunes is impressive.

This is a very interesting sun dial.

Urbo hill is one of the highest hills (dunes) in Nida. It rises about 51 m. above sea level. It takes the name from the word urbas (pit, hole), because a hollow used to be on top of this dune. In 1870-1874 it was from all sides planted with mountain pines. The old Nida lighthouse flaunts on top of this hill along with a viewpoint. This is one of the largest lighthouses on Lithuanian seacoast. A 27 meter high lighthouse of red bricks was built in 1874. The cobble-stone path of 200 stairs led to the lighthouse which has still remained in present.

A nice promenade along the village. Take a look into the fishermen houses and the typical weather vanes, carved by the locals. Get back through one of the inner streets: you will see beautiful houses, with absolutely stunning gardens!

This small museum was once Thomas Mann's summer house. You can see exhibits in the hallways and in two rooms.