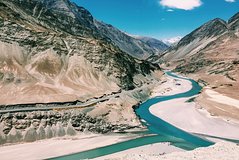 This 7-day private sightseeing tour offers visits and insights to all the major destinations in Ladakh. Starting from Leh on day-1, guests will be transferred to multiple attractions during the course of the tour, accommodated in hotels and given detailed information about the sites.

Witness the cultural beauty of Ladakh at Shanti Stupa, spiritual beauty at Gurudwara Pathar Sahib and Diskit Gompa, and natural beauty at Pangong Lake, Hundur Sand Dunes and The Confluence of the Zanskar & Indus.

The beauty of Ladakh is not to be missed, and with comfortable transport, stay, meals and experienced guides, this 7-day expedition is one of a kind experience.

Stop At: Leh Royal Palace, Leh India
Arrival in Leh, our representative will transfer you to Hotel in Leh where you will check in with a traditional welcome. Days rest advised to acclimatize to the high altitude of Ladakh.
Visit the Leh Palace the overlooks Leh town and is modelled on the Potala Palace in Lhasa, Tibet. The palace, a ruin, is currently being restored by the Archaeological Survey of India. The palace is open to the public and the roof provides panoramic views of Leh and the surrounding areas. The richest collection of jewellery, ornaments, Thangkas, ceremonial dresses, crowns, and centuries-old pieces of jewellery are kept here for public display. There are Chinese Thangka or sooth paintings which are more than 450 years old but still look new.
Duration: 1 hour

Stop At: Shanti Stupa Road 500 steps from Changspa Road, Leh 194101 India
In the evening visit Shanti Stupa, a popular sunset spot with a panoramic city view.
Shanti Stupa/Japanese peace pagoda is built by a Japanese religious organization headed by Head monk Nakamura with help from the organization and local people. It is situated at a hill top in Changspa village providing a birds eye view of the Leh town. Architecturally it has the Japanese touch with small clean rooms on the side for mediators and the main Japanese shrine at the entrance.
Duration: 1 hour

Stop At: Spituk Monastery, Spituk Village, Leh 194101 India
8 Kms from Leh, it stands prominently on the top of hillock commanding a panoramic view of the Indus Valley for miles. This 15th century Gompa houses interesting icons and thangkas of Lord Buddha. The Gompa also houses a collection of ancient masks, antique arms, and an awe-inspiring image of Mahakaal. The face of the Kali image is kept covered and is revealed only at the annual function at January every year.
Duration: 1 hour

Stop At: Magnetic Hill, Leh-Kargil-Srinagar national highway, Leh 194101 India
A law of gravity defying phenomenon. This stretch of hills is at a short distance from Gurudwara Shri Patthar Sahib. It has been noticed that when a vehicle is parked on neutral gear on this metallic road the vehicle slides up-hill although some believe its only an optical illusion.
Duration: 1 hour

Stop At: Confluence of the Indus and Zanskar Rivers, Leh India
On way to Sham Valley before Nimu village one can have this magnificent view of two rivers in wedlock! In seasons they have different colors and flow and wildness.
Duration: 2 hours

Stop At: Gurudwara Shri Pathar Sahib, NH 1D, Phey, Jammu and Kashmir 194101
Gurdwara Pathar Sahib, is a beautiful Gurdwara Sahib constructed in the memory of Guru Nanak, about 25 miles away from Leh, on the Leh-Kargil road, 12000 ft above the sea level. The Gurdwara was built in 1517 to commemorate the visit of Guru Nanak Dev to Ladakh , the founder of the Sikh faith.
Duration: 1 hour

Stop At: Khardung La Road, 194101 India
Situated at an altitude of 18,379 ft. above the sea level, Khardung La makes one feel on the top of the world. It was once believed to be the highest motorable pass in the world, but facts prove it is among the highest motorable passes in India. This mountain pass in the Ladakh region of Jammu and Kashmir was prepared for motors in 1976 and opened in 1988 for the public.
Duration: 30 minutes

Stop At: Diskit Gompa (Diskit Monastery), 34°32′28″N 77°33′37″E, Diskit India
Diskit Gompa is the oldest and largest Buddhist monastery in the Nubra Valley of Ladakh, northern India. It belongs to the Gelugpa sect of Tibetan Buddhism. The main and unique attraction of Diskit monastery is a gigantic statue of Lord Buddha on the top of it.
Duration: 2 hours

Stop At: Hunder Sand Dunes, Hunder 194401 India
Like an oasis amidst the cold desert, Hunder Sand Dunes are beautiful beyond imagination. Located at an altitude of 4,000 meters, the desert is cut across by a gentle stream and the beautiful countryside. With such stunning landscapes against the backdrop of the snow-clad mountains, the Hunder Sand Dune looks nothing less than a fairy world. Beyond its beauty, the dunes are home to the Bactrian Camels, the major key players during the ancient silk route, and Pashmina Goats. Tourists can also go on a safari on the Bactrian camel that will take them back to the time when the trade was quite prominent within Central Asia and to the remote village of Hunder.
Duration: 1 hour 30 minutes

Stop At: Pangong Lake, Leh, Jammu and Kashmir 194201
Morning after breakfast drive to Pangong Lake on the Indo China border. The main attraction of this circuit is the Pangong Lake, situated at 14,000 feet (4,267 M). A long narrow basin of inland drainage, hardly six to seven kilometers at its widest point to which foreigners are permitted, is only some seven km along the southern shore from the head of the lake, but it affords spectacular views of the mountains of the Chang Chenmo range to the north, their reflection shimmering in the ever-changing blues and greens of the lakes brackish water. Above Spangmik are the glacier and snow-capped peaks of the Pangong range.
Duration: 4 hours

Day 5: Drive back to Leh from Pangong

Stop At: Thiksey Monastery, Leh Manali Highway, Leh 194101 India
Situated 19 Kms from Leh and spectacularly placed atop a mountain in the middle of Thiksey village. Thiksey is one of the largest and architecturally most impressive Gompas in Ladakh and is inspired from Potala palace in Lhasa. There are several temples in this Gompa, containing images, stupas and wall paintings of Buddha, religious texts and the largest statue of Buddha in Ladakh is also installed here.
Duration: 1 hour

Stop At: Shey Monastery, Indus River, Leh India
Situated on a hillock 15 Kms upstream from Leh, it was once the residence of the royal family and the summer capital of Ladakh. A 7.5 mts high copper statue of Shakyamuni Buddha, plated with gold is installed here. The palace offers one of the most panoramic views of the surrounding villages, grasslands and river Indus.
Duration: 30 minutes

Stop At: Stok Palace Museum, Stok Palace, Leh 194101 India
Offbeat Ladakh is where you will find the true gems of Ladakh  the places where the Ladakhi culture still courses through, unbridled, untamed and wild  much like the land that it occupies. Ladakhs villages, most of which are still unexplored, are the places you should be looking out for as you plan your next Ladakh holiday.

The Stok Palace Museum houses an intriguing collection of precious artefacts and relics related to Ladakh's old monarchy, which particularly attract historians and anthropologists. Ancient coins, royal seals, regal costumes, precious jewellery and photographs can be found well preserved in this museum. Also displayed here are the royal familys collection of thangkas, some of which are over 400 years old. A separate room exhibits warfare equipment of Ladakh's kingdom, where visitors can see an impressive assortment of swords, shields, bows, arrows, quivers and guns.

Day 7: Departure from the Mountains

Stop At: Ladakh, Raku Complex, Fort Road, Leh, Jammu and Kashmir 194101
It would be very hard to say bye to the mountains. After breakfast, Catch early morning flight back.