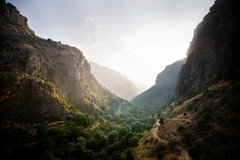 Escape Beirut and head to a full-day trip to the North of Lebanon.

Visit the old monastery of Saint Antonios Kozhaya located at the heart of the Kadisha Valley.

Discover the paintings and manuscripts of the big writer & poet "Gibran Khalil Gibran" inside his museum. Walk the majestic Cedars trees of Lebanon in one of the largest natural reserves, the "Cedars of God".

Wadi Qadisha, also known as "Holy Valley" is a valley filled with old monasteries in Noth of Lebanon. One of the oldest monasteries in Qadisha valley is Mar Antonios kozhaya, situated at a height of 950 meters above sea level. This Monastery was first built and began to be occupied by hermits at the beginning of the fourth century.

The Monastery remains a beacon of salvation and holiness; this is the fact that imparts to it all its charisma and fascination!

Bcharre is a breathtaking town in Northern Lebanon. With an altitude of 1,500 meters, Bcharre has quite a rich history.

Bcharre is the hometown of Gibran Khalil Gibran, the author, poet, and Lebanese painter renowned worldwide for his book The prophet, translated in many languages.

Outside the museum, the visitor can admire the village of Bcharre overlooking the sacred valley of Qadisha.

Stop At: The Cedars of God, Bcharre Lebanon

Located just eight kilometers from Bcharre, The Cedars of God is one of Lebanons most beautiful nature reserves and home to the oldest Cedar Forest.

The Lebanon Cedar is one of the most majestic trees of the world.

Over the years, many peoples have made use of cedar wood provided by the forest. The Phoenicians used it to build their ships, Egyptians to make paper, and other civilizations like the Romans and Turks exploited the natural treasure for trade. The trees also hold significant religious importance, as they are mentioned in the Bible on several occasions: Solomon used their wood to build Jerusalem and Emperor Hadrian ruled them as royal domains which stopped their destruction.

The Qadisha Valley is a gorge that lies within the Becharre and Zgharta Districts of the North Governorate of Lebanon. The valley was carved by the Kadisha River, also known as the Nahr Abu Ali when it reaches Tripoli