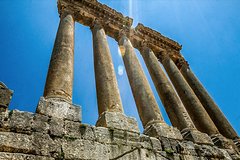 Join our small group tour from Beirut and explore Baalbek, Anjar and Ksara. Discover the Heliopolis in Baalbek, explore the ruins in Anjar and get to know about Ksara the Lebanese winery and taste delicious wine while being there.

The Baalbek valley has been settled since at least 9,000 BC, and in Bible times it was the site of gory human sacrifices to Baal, the Canaanite god of fertility.

Some of the remnants of this ancient civilization can still be seen here.

Baalbek was renamed Heliopolis after being conquered by the Greeks, and then it was later used by the Romans as a foundation for a new temple complex that took 250 years to build.

The most notable Roman buildings in the complex were the temples of Bacchus, Jupiter, and Venus. Together, these made up one of the largest temples of the entire Roman Empire.

Over the years, the temple of Baalbek (aka Heliopolis) was damaged pretty extensively by earthquakes, and occasionally plundered for stone.

At different times in history, its been occupied by the Phoenicians, Greeks, Romans, Byzantines, Ottomans, and even the Mongols.

Interestingly, some of the Corinthian columns were even disassembled by the Byzantine Empire and used in the 537 AD construction of the Hagia Sophia in Istanbul, Turkey, which is known today as one of the most famous wonders of the ancient world.

Dominating the centre of modern Baalbek, this wonderful Roman temple complex is one of the Middle East's major archaeological highlights. The monumental Temple of Jupiter impresses by its sheer scale, while the adjacent Temple of Bacchus is astoundingly well preserved, with exquisite carved decoration. A museum in a tunnel under the complex has good information. The much smaller Temple of Venus is opposite the main entrance. In summer the ruins are the atmospheric venue for the Baalbeck International Festival.

Chateau ksara, the countrys oldest winery, began life in 1857 when Jesuit FATHERS inherited and began farming a 25 hectare plot of land to produce Lebanons first non-sweet red wine. In doing so they laid the foundations of Lebanons modern wine industry.

It is worth remembering however that Lebanons oldest winery is merely continuing a 5,000-year-old trading tradition. Lebanon sits on the site of ancient Phoenicia, one of the worlds oldest merchant civilizations and one of the first to sell its wines to other nations.