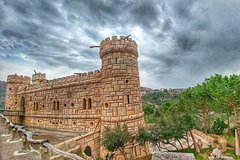 Our day trip from Beirut to Chouf Area starts with the visit of Deir El Qamar, a village consisting of stone houses with red-tiled roof. After visiting the monastery and churches in Deir el Qamar, continue to Beiteddine Palace, a masterpiece of the early 19th-century Lebanese architecture. Visit Moussa Palace, the castle built by a man that has achieved his dreams by building his own palace. Next, visit Ain w Zein Grotto, discovered in 2003, a natural grotto that consists of branching caves hollowed out in the bowels of the rock by water flowing from the depths of the mountains. It has become an important tourist site.

Visit Beiteddine Palace built over 30 years beginning in 1788, the palace was the personal home of Emir Bashir Shihab II who wanted the mansion to be a place of singular beauty and legendary opulence. The castle was built on a hermitage called Beiteddine (House of Faith) and featured all manner of amenity including a lush personal apartment for the emir, a harem, and a rich guest house that was often offered to passing luminaries and dignitaries. Many of the surfaces were inlaid with intricate mosaics and designs, many of which have survived remarkably well to this day.

Once youve explored the palace head to the village of Der Al Kamar "Monastery of the Moon", it is a village in south-central Lebanon, five kilometres outside of Beiteddine consisting of stone houses with red-tiled roofs. Der Al Kamar is known as the Capital of Emirs. From its palaces, Mount Lebanon was governed from the 16th century until the 18th century. People from all religious backgrounds lived there and the town had a mosque, synagogue and Christian churches.

Stop and explore the Moussa Castle, located between Der Al Kamar and Beiteddine. It is a story of one man's courage, faith, patience and hard work to turn a dream into reality because his crush said she wanted to marry a man who owned a palace. It was built single-handedly by Moussa Abdel Karim Al-Maamari. He needed 60 years (21900 days and 394200 hours) of work. The interior is brimming with sculptures handcrafted by him to represent aspects of rural Lebanese life.

Visit Ain w Zein Grotto explore the stalactites suspended from the roof of the cave are not merely impressive as natural sculptures; as well as his eyes, the ears of the visitor who walks along are charmed by a succession of musical notes provided by the droplets of water that drips from their extremities down to pools below. The grotto is located in Ain Wazein at an altitude of nearly 3,500 feet above sea level. It is thirty miles from Beirut, and five miles away from Beit-Eddine, at the centre of the Shouf district. It lies on the Ain Wazein Road, near the northern end of Ain Wazein, and has been explored to a point 426 meters deep. The grotto takes the form of a series of passages and halls of varied width and height, all-natural formations resulting from the accumulation of water under pressure.