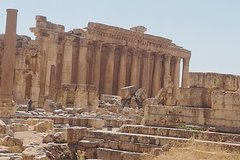 Book a half-day private car to the amazing city of Baalbek, and

explore the fascinating city and marvel at well preserved historical remains such as the temple of Bacchus, Venus and Jupiter. Its monuments make up the largest and best-preserved corpus of roman architecture left around. After lunch, we will continue to Ksara for Wine Tasting and a visit for the caves and winery.

As early as 9000 BC, Baalbek was a place for worship and became a cornerstone of ancient civilizations. Located in modern day Lebanon, the ruins stand tall as an archaeological wonder with towering monuments and impressive columns.

Baalbek is an ancient Phoenician city located in what is now modern day Lebanon, north of Beirut, in the Beqaa Valley. Inhabited as early as 9000 BCE, Baalbek grew into an important pilgrimage site in the ancient world for the worship of the Phoenician sky-god Baal and his consort Astarte, the Queen of Heaven (the name `Baalbek' means Lord Baal of the Beqaa Valley). The center of the city was a grand temple dedicated to Astarte and Baal and the ruins of this early temple remain today beneath the later Roman Temple of Jupiter Baal. Baalbek is listed by UNESCO as a World Heritage Site.

Enjoy the best of Lebanon wine at chateau Ksara