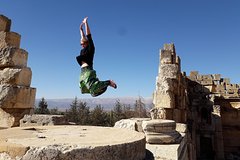 Get amazed by two of Lebanons main highlights: the UNESCO World Heritage Sites of Baalbek and Anjar. You will have the time to take a personal walk through the old souqs, palaces, mosques and baths of Anjars impressive early 8th century Umayyad site, built by Lebanons first Arab dynasty and used to serve as an inland trading center. Next, we will have a stop at a Roman quarry, home to the largest man-cut stone in the world and where you will enjoy a freshly prepared lunch bag full of home-made pleasures. With a satisfied belly, we will continue our day with a travel through Baalbeks spectacular history of worship during a guided visit to the world's largest and most outstanding Roman temple complex; a homage to Jupiter, Venus and Bacchus.

Operates: Anjar comes from the Arabic Ayn Jariyeh, or "source of flowing water". The name of the source became Ayn Gerrha, a source located 1 kilometer northeast of the ruins.