Private Trip to Sigulda and Turaida from Riga 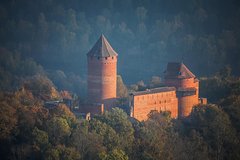 Private Trip to Sigulda and Turaida from Riga

During the tour you will discover the history and lifestyle of ancient Latvian tribes. You will visit sightseeing attractions like Livonian Order Castle ruins, Turaida Medieval Castle built in 1214 and the wooden church built in 1750. Gutmanis Cave, the deepest internal erosion cave in the Baltic States, measuring 19m deep, 12m wide and 10m high, is not only a natural wonder, but also a place steeped in myths and legends.

On the left bank of the Gauja River, opposite the Piķene cliff is the mighty Beite cliff which is split by a deep ravine. On the left side there is Ķeizarskats (Emperor's View), which is approximately 67 metres above the level of the Gauja and offers a fine view of Krimulda and the Turaida Castle. The viewing place was installed in 1862, when Russian Tsar Alexander II visited Sigulda.

The Brothers of the Sword, who controlled the left bank of the Gauja river, built the Sigulda Castle in the period from 1204 to 1209. Originally, it was a "castellum" type fortress with a chapel. Later, the castle was rebuilt into a convent-type building. The castle had a wide outer forepart, where a bustling settlement of traders and craftsmen was formed.

During the Livonian War, Russian, Polish and Swedish troops were fighting near the castle. The castle was damaged in wars and eventually lost its military importance. In addition, in the early 18th century the castle was destroyed during the Northern War and has not been restored since then.

Mighty stone walls of ruins keep many historical events and stories. It is fascinating to imagine how the knights of the Livonian Order were mastering their fighting skills in this place.

In the ruins there is an open-air stage, where visitors can experience memorable moments of annual Opera Music Festival, as well as of other events.

The territory of the Livonian Order Sigulda Castle is a suitable place to appreciate the beautiful landscapes of the Gauja Valley.

Visiting the ruins, you can walk along the stone walls and climb the castle towers. In the northern tower you can watch exposition of medieval weapons.

Inside the chilly Gutman's Cave you will feel the presence of ancient stories and people. The sun rays that play in the spring of Gutman's Cave and reflect on its walls in beautiful patterns of light awaken the ancient legends!

One legend has it that in ancient times the cave was home to a good man who used the water of the spring to heal people. The caves name is derived fromthe German phrase gut Mann, which means good man. That is why people believe that the spring has healing properties. Let the spring water refresh you and the ancient legends inspire you!

The Gutman's Cave has also been the backdrop for one of the most ancient and heart-breaking love stories.

The Museum Reserve is a vast territory, rich in art and history gems  the Turaida Castle, the wooden church and many other buildings, as well as the sculpture garden.

The Main tower of the Turaida stone castle rises over the forests of the ancient Gauja River valley. After having vanquished its 139 brick steps, you can enjoy breathtaking views of the meandering Gauja River and the valley rich in forests.

Special Offer - Book by January 18 to save 5% off our previously offered price! - Book Now!