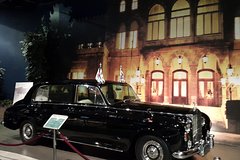 The Royal Museum tour is a private family friendly day outing in Amman. What better way to know Jordan but through the rich history of the museums and an open air classroom. The tour begins with the Citadel and Archaeological Museum starting with a walk back in time, with panoramic views of the city of Amman and downtown. Visit Ammans latest hip neighborhood Jebal Whebdeh, where expats and young Jordanians enjoy the neighborhoods quaint cafes and galleries. End your tour with the Royal Auto Museum that portrays the current and previous Hashemite Royal Family. Tour starts from 9am.

Your friendly and professional driver will meet you at your hotel lobby either in Amman at 9.00am. Start your 5 hour tour at the Citadel, the main archaeological site of the city. You will have the option to hire a local guide at the entrance of the Citadel for a detailed tour. The Citadel or Rabbath-Ammon, went through numerous excavations which revealed Roman, Byzantine and early Islamic artifacts. Located on top of a hill, the Citadel allows for stunning views of downtown Amman, the Jordan flag and the Roman Amphitheater which dates back to the 2nd century AD. At the Citadel, the first museum to tour is the Jordan Archaeological Museum, located up the hill from the entrance of the Citadel, housing a timeline from the Roman, Byzantine and Early Islamic.

Once you finish the Citadel and the Archaeological Museum, your driver will be waiting at the entrance to drive you to the hip neighborhood of Jebal Whebdeh. Here you can find Ammans modern museum, the Royal Society of Fine Arts Museum and Gardens, which houses the largest collection of artworks by contemporary artists from the developing world. This collection includes paintings, prints, sculptures, photographs, weaving and ceramics from over 59 countries in Asia and the Middle East. A gift shop is located in the museum featuring prints and Jordanian crafts for sale.

End your tour at The Royal Automobile Museum and The King Abdullah Gardens. The museum depicts the history of the Hashemite Kingdom through featured cars which highlight the life of his Majesty, the late King Hussein and the current King Abdullah. You will have the opportunity to drive around and take photos in The King Abdullah Gardens which includes the largest mosque in Jordan, the King Hussein Mosque. A gift shop is located at the Royal Museum with souvenirs and trinkets.

After a lengthy history of Jordan with the Royal Museum Tour, your driver will then take you back to your hotel or location in Amman and en route, stop for a snack if desired.