Jacob's well from Jerusalem and Tel-Aviv 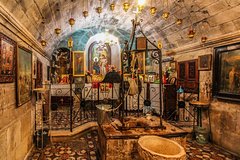 Jacob's well from Jerusalem and Tel-Aviv

This is where it's believed that Jesus came to drink water from the
Samaritan woman who was at the well in the book of John 4:426.,
it's a deep well hewn of solid rock that has been associated in religious tradition with Jacob for roughly two millennia. It is situated a short distance from the archaeological site of Tell Balata, which is thought to be the site of biblical Shechem found a beautiful Greek Orthodox Church that is found on the east side of Nablus (Iscar).

I'm from the ancient Samaritan Community in Nablus, we hold both Israeli and Palestinian IDs (including a Jordanian one) which means we can travel all around the Holy Land without any problem, I'll be happy to share the story of the Samaritans too on the way to the well!