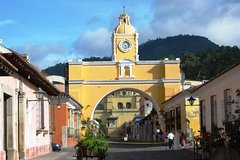 Antigua Guatemala, commonly referred to as just Antigua or La Antigua, is a city in the central highlands of Guatemala famous for its well-preserved Spanish Baroque influenced architecture as well as a number of spectacular ruins of colonial churches.

It has been designated a UNESCO World Heritage Site.

Central Park (Parque Central) is the heart of the city. The reconstructed fountain (Las Sirenas) there is a popular gathering spot.

The Mercedarians were the first to establish a male monastery at the former Santiago de Guatemala.[1] The cross in stone at the atrium and the rooms behind the main altar are the oldest structures in La Merced and date from the seventeenth century. In 1749 Juan de Dios Estrada was commissioned with the construction of the luxurious sanctuary and cloister. He erected a building of low height designed to withstand earthquakes based on the experiences of the tremor of 1751. Arches and columns are wider to cope with the quakes. It was opened in 1767.

When Franciscan missionaries arrived in Guatemala from Spain in 1530 they were assigned 120 villages by the civil authorities.[1] They were the first to move to the Panchoy Valley in 1541 where they built a church at the site of today's School of Christ (Escuela de Cristo). This chapel was severely damaged in 1565 and during the next ten years donations were collected to build a new sanctuary located two blocks away in 1579. Parts of this construction, maybe the only ones in Antigua which date back to the 16th century, can be appreciated at one side of today's sanctuary.

The Santa Catalina Arch is one of the distinguishable landmarks in Antigua Guatemala, Guatemala, located on 5th Avenue North. Built in the 17th century, it originally connected the Santa Catalina convent to a school, allowing the cloistered nuns to pass from one building to the other without going out on the street. A clock on top was added in the era of the Central American Federation, in the 1830s.