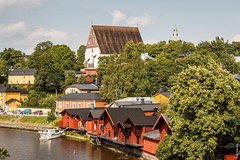 Theres just something about Helsinki! In fact, there are so many things about Helsinki that made me love it so, and if youre wondering what to do in Helsinki then definitely book a tour with me and ill make you love this city!

A distinctive landmark in the Helsinki cityscape, with its tall, green dome surrounded by four smaller domes, the building is in the neoclassical style. It was designed by Carl Ludvig Engel as the climax of his Senate Square layout: it is surrounded by other, smaller buildings designed by him.

Excavated directly into solid rock, the Temppeliaukio church is situated in the heart of Helsinki. The church hall is covered with a dome, lined with copper and supported on the rock walls by reinforced concrete beams. The interior walls are of rugged rock and rubble wall.

The Sibelius Monument, resembling organ pipes, is made of welded steel with over 600 pipes and with the bust of the composer on one side.

You get to experience a short walk around Porvoo town along narrow cobblestone streets surrounded by colorful historical wooden buildings. Especially iconic riverside warehouses along the river date back hundreds of years and are now the towns landmark. You will also visit impressive Porvoo Cathedral walk next to the river and visit picturesque small shops, flea markets and charming cafés.

The first known reference to Haikko Manor dates back to the year 1362. Thee Manor was then owned by the Dominican priory of Vyborg. Jöns Olofsson bought the manor later and it remained in the ownership of the Stenbock family for the next four hundred years.