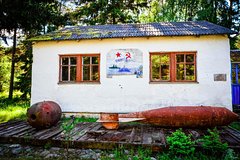 Womens Island was a popular outing destination prior to World War 2, and home to the Aibofolk. The Soviet Army then occupied the island and turned it into a secluded military base. Explore the sights from the Soviet military period and remnants of pre-war life.
Depart for a 1-hour boat voyage from historic Lennusadam, passing sights such as Katherina Keys, Bald Island, and Midshallows Lighthouse.
A 1.5 hour adventure will be awaiting you on the island. Majority of the tour is covered on a military truck and a small portion on foot. You have an amazing opportunity to visit an abandoned sea mines stockyard that was once a top-secret Soviet military base. Afterwards the tour will take you to the Fire Boulder, that has a thrilling tale to tell. As a final step we will visit a sanctuary for the native people of the island, where you will learn about the exciting past of the former habitants. At the end of your tour you can take some time to wander on the beach and enjoy a buffet lunch.

Once you reach the island, take a 2.5-hour guided tour by military truck and by foot. Discover the sea mines stockyard, once a top-secret Soviet military base. Head to the Fire boulder, a remnant of the Crimean War, and see the birthplace of world-famous optician Bernhard Schmid. See Sternschanz, the original fortress created by Russian Emperor Peter the Great. Move on to a Swedish church and graveyard, restored and sanctified in 2018 in a celebration attended by the Estonian President and Swedish Crown Princess Victoria. After a visit to the island's museum, take some time to wander the beach and enjoy a buffet lunch.