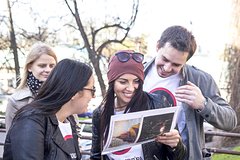 Tartu is a city in motion, empowered by the changes that have taken place over the last decade. What is so special about the city's location? What is Northern Europes most unique examples of medieval sacral buildings? You will discover the cozy and beautiful Old Town of Tartu. Did you know that it is the oldest city in the Baltic States? Your local professional guide will show you the most important places and buildings in the city. Perfect for those who are visiting the city for the first time!

The Leaning House of Tartu, which people also call the Pisa Tower of Tartu, was built next to the medieval city wall in 1793. The side of the house that faces the river is supported by the old city wall and the other side by poles. This is the reason why the house is leaning sideways. The permanent exhibition of Estonian Art of the Tartu Museum of Art is open in the house.
Interesting facts: - the house is also called the Barclay House as Princess Barclay, who bought the building in 1819 after the death of her husband Barclay de Tolly, lived there; - a pharmacy operated in the building for a long time, from 1879. Popular Estonian writer Oskar Luts worked in this building as a chemist in the beginning of the 20th century.

Tartu Toy Museum, situated in the Old Town of Tartu, takes adults back to the brighter days of their childhood and offers children plenty of interesting things to see and do.

The permanent exhibition displays toys that Estonian children have played with throughout the years. Artist-made dolls, souvenir dolls of different nations, and Finno-Ugric traditional toys are also exhibited. Playrooms and workshops are also open. You can see puppets from Estonian puppet films and temporary exhibitions in the outbuilding.
The museum also has a theatre building named Teatri kodu (The Home of Theatre) with a theatre hall, a museum of puppets, and a childrens studio.

Tartu Cathedral, located on the beautiful Toomemägi Hill, is one of the largest churches in Estonia. It is also the only mediaeval church with two towers in Estonia. The construction of the church started in the 13th century and the church was fully completed in the beginning of the 16th century. The church towers were the last things to be finished. During the Livonian War, the church was destroyed and since then, it has not operated as a church. The ruins of the Tartu Cathedral are one of the most prominent examples of brick-Gothic buildings in Old Livonia.