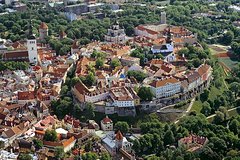 We provide a private oldtown city tour.
You will enjoy the most famous places in the Tallinn old town.
Our driver will provide some excellent experience and basic tour guide information.

St Olaf's Church in Tallinn, the city's biggest medieval structure, took its name from the sainted Norwegian king Olav II Haraldsson. The church was first mentioned in 1267. It became one of the main churches in the Lower Town and formed its own congregation, which at first mostly comprised Scandinavian merchants and craftsmen and few Estonians.

This open area at the edge of Old Town is a place of national symbolism and civic pride, as well as a favourite gathering spot.

From the last days of the Tsars and through Estonia's first period of independence, Freedom Square (Vabaduse väljak) was a place of parades and fanfare, but fell into neglect during the Soviet and post-Soviet period. In 2009, after extensive renovation, it was restored to its former glory.

It's also by far the grandest, most opulent Orthodox church in Tallinn.

Built in 1900, when Estonia was part of the tsarist Russian empire, the cathedral was originally intended as a symbol of the empire's dominance  both religious and political  over this increasingly unruly Baltic territory.

This pair of picturesque, ivy-covered towers at the entrance to Viru Street is often the first glimpse visitors get of Old Town.

Anyone passing between them couldn't be blamed for thinking they've left the 21st century behind and landed smack in the middle of the 18th.

The towers are actually only the foregates of what was a much more complex gate system built in the 14th century. It included a large, square tower that stood father back along the street, close to where the city wall can be seen.