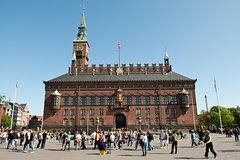 Travel from Arne Jacobsen's SAS Royal Hotel, one of the first masterpieces of postwar Danish design, past the city's environmentally-conscious modern architecture to its Art Nouveau city hall. Pass by the famous old townhouses at Nyhavn - a scene you may recognize from postcards of Copenhagen - and the auction houses where great vintage Danish design is for sale. End at the Danish Design Museum.

Nyhavn is a 17th-century waterfront, canal and entertainment district in Copenhagen, Denmark. Stretching from Kongens Nytorv to the harbour front just south of the Royal Playhouse, it is lined by brightly coloured 17th and early 18th century townhouses and bars, cafes and restaurants.

Tivoli Gardens has an elaborate neoclassical stone archway entrance and is one of the world's first amusement parks. It opened in 1843, and it's been operating ever since.

The Glyptotek is a museum for people who love pre-20th century art. It has a beautiful winter garden and a café. The collection is built around the personal collection of Carl Jacobsen, the son of the founder of the Carlsberg Breweries.

The Danish National Museum building isn't too impressive but the Viking artifacts inside the museum are really exciting. These are really the first examples of Danish design, and you'll find lovely gold jewelry as well as weapons and coins.

Frederik's Church commonly known as The Marble Church was built in the Rococo style, and based on St. Peter's Basilica in Rome.

The Danish Museum of Art & Design is a museum in Copenhagen for Danish and international design and crafts. It features works of famous Danish designers like Arne Jacobsen, Jacob Jensen and Kaare Klint.

Copenhagen City Hall was finished in 1905, and is an excellent example of National Romantic Style, which was the Scandinavian version of Art Nouveau.

The Alexander Nevsky Church has a patterned façade and golden towers on top. It's the only Russian Orthodox Church in Copenhagen.

Kongens Nytorv, or King's Square, is another major Copenhagen hub.

Thorvaldsen's Museum is a good symbol of the changing tastes of Danish design. Thorvaldsen was a Danish guy who went to Italy and learned to carve in the Classic style. But tastes have changed, and the classical style he worked in is now out of fashion.

The Christiansborg Palace is used for state dinners and things and it's the home of the Danish Parliament, the Folketing.

Charlottenborg Palace was originally a private mansion for a King's brother, but now houses the Royal Danish Academy for the Fine Arts.

The church near Nikolaj Square is a 1909 restoration of a very old one that burned down. The restored version has actually never been used as a church. It was a naval museum, a library and now it's actually a modern art museum.

Amagertorv can fairly be called the center of Copenhagen. The fountain at Amagertorv is called the Stork Fountain, and it's a classic place to meet up with friends.

The Odd Fellows Palace is named that because it housed a Masonic Lodge for many years, but now it's mostly a wedding and party venue.

Arne Jacobsen's SAS Hotel, now called the Radisson Blue Royal, was completed in 1958. Arne Jacobsen is considered an originator of what we now know as Danish design - smooth, simple, organic, practical and beautiful.