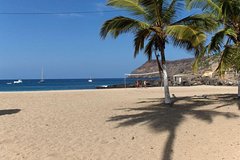 This product is unique because it provides customers with a unique experience from one of Santiago's and Cape Verde's main tourist attractions. Includes historical, cultural and sun and beach experience.

The Tarrafal Concentration Camp, the present Resistance Museum was created by the
Portuguese government to remove prisoners from the metropolis, such as the
political and social prisoners.
It is located in Chão Bom locality on the Tarrafal council.
operations on October 29 with the arrival of the first prisoners from Portugal.
The camp is divided by part and saddles, in which each saddle was occupied by prisoners of the same nationality and who committed the same crimes.
There were mainly prisoners from Portugal, Guinea Bissau, Angola and Cape Verde.
In the year 2000 was created the Museum of Resistance that is integrated in the project of musealization of the old concentration camp, or also called the slow death camp.

Situated in the bay of Tarrafal with white sand and crystal clear water, the beach of Tarrafal is, according to many, the best beach of Santiago Island.