2. Nature, History of FOGO and relaxation at the natural pool of Salinas 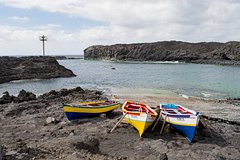 2. Nature, History of FOGO and relaxation at the natural pool of Salinas

The island of Fogo is fascinating. In addition to its volcano, it has contrasting natural landscapes and unpublished natural places. This circuit, rich in natural curiosities and historical stories, highlights the city of São Filipe and the west side of the island. Stroll through the streets of São Filipe, one of the oldest cities in the country, where the past is now told through the architecture of the city and its "Sobrados". Then in Salinas, recharge yourself in this natural pool formed by the meeting of the sea and lava flows. You will also enjoy a typical drink of the country: the punch of "Calabaceira", the fruit of the baobab.

The city of São Filipe is part of the national cultural heritage of Cape Verde because of its old colonial houses called "Sobrados". They are located all around the azure blue church. This ancient city of Cape Verde has retained its authenticity and colors.